Boost Your Immune System after Chemotherapy

Chemotherapy tends to weaken the immune system because it often damages bone marrow. In turn that can reduce the body’s ability to produce enough white blood cells, red blood cells and platelets. White blood cells are generally most affected and when they are reduced, the body becomes more vulnerable to infection.

White blood cells called neutrophils and macrophages are especially important because they are a key element in your innate immune system. Neutrophils attack and destroy pathogens like bacteria and viruses, and macrophages ‘gobble’ them up (macrophage means ‘big eater’).

This illustration shows how macrophages digest and break down invading pathogens. 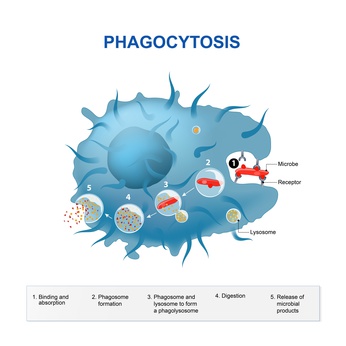 People on chemotherapy will be tested for their ANC – or Absolute Neutrophil Count – which normally drops about a week after chemotherapy starts.

Consequently, boosting the number and activity of neutrophils and macrophages is a logical and supportive action for anyone undergoing chemotherapy.

The natural ingredient in ImmunoShield, called Wellmune ® 1-3, 1-6 beta glucans, has been shown in clinical trials to increase the number and activity of neutrophils and macrophages. So if you have had chemotherapy it is worth discussing using ImmunoShield with your physician or oncologist.

Wellmune beta glucan is an immune-modulator which helps make your immune system more responsive – increasing its defensive capability. The particle size of beta glucans is an important criterion for its effectiveness and Wellmune has patents covering is production process and over $200 million worth of clinical trials behind it. Indeed it has also been evaluated in conjunction with certain cancer drugs – particularly monoclonal antibody therapy.

The US Journal of Hematology & Oncology, in an article titled “The effects of β-glucan on human immune and cancer cells” states:

“β (beta)-glucans act on several immune receptors … and trigger a group of immune cells including macrophages, neutrophils, monocytes, natural killer cells and dendritic cells. As a consequence, both innate and adaptive response can be modulated by β-glucans.

“The ability of the innate immune system to quickly recognize and respond to an invading pathogen is essential for controlling infection.”

Beta glucans have been used as an immune-adjuvant therapy – ie. in combination with pharmaceutical drugs – for cancer since 1980, largely in Japan, but also notably at the James Graham Brown Cancer Center in Louisville Kentucky. 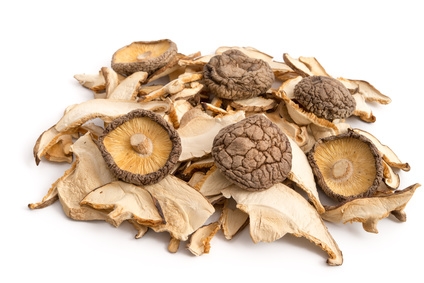 Researchers at Teikyo University’s Biotechnology Research Center in Kawasaki, Japan, showed that lentinan – a beta glucan found in shiitake mushrooms – can help suppress the formation and development of tumours and lessen the side effects of cancer treatment.

Other fruits and vegetables

Your immune system, however, needs a wide variety of nutrients to function well and you should follow the generalised advice to increase intake of fruits and vegetables. Foods that have a specific impact on the immune system, other than shiitake and maitake mushrooms, include dark berry fruits, cruciferous vegetables like cabbage, spinach, broccoli and kale, citrus fruits for their vitamin C content, garlic, wheat germ which is high in vitamin E and green tea.

If you are taking a supplement, a one-a day will not contain the range you ideally need. Look for a supplement that includes a balanced range of immune supporting nutrients like green tea extract, flavonoids, Omega 3, vitamin D3, all 8 forms of vitamin E, curcumin, carotenoids, selenium and zinc. NutriShield contains these and more.

Mechanism by Which Orally Administered ß-1,3-Glucans Enhance the Tumoricidal Activity of AntiTumor Monoclonal Antibodies in Murine Tumor Models. The Journal of Immunology. 2004: 173: 797-806.