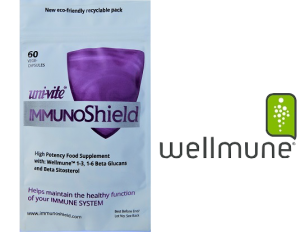 What’s in ImmunoShield and why?

Wellmune ™ is a registered trademark of Kerry Group.

Wellmune stimulates the production and activity of macrophages and neutrophils, which are key components of the innate immune system. Published research demonstrates that Wellmune mobilises immune cells to move faster and in increased numbers to foreign intruders and destroy them more effectively.

Macrophages are cells that recognise, engulf and destroy cells, organisms and substances that are potentially harmful (eg. bacteria, viruses, and fungi).

Neutrophils are the most abundant cells in the innate immune system and part of your front line of killer cells operating against viral and bacterial threats.

An illustration of mobilised neutrophils (pink) targeting a pathogen (green) 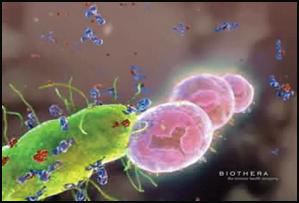 An activated neutrophil destroying the pathogen

Wellmune ™ has been thoroughly tested for both safety and effectiveness and can be used either daily at a low dose or at increased levels during high-risk periods.

How exactly does Wellmune work? 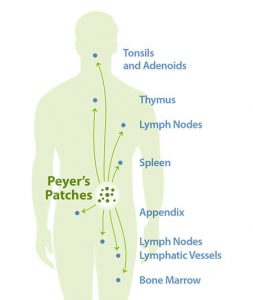 When you supplement with Wellmune®, the beta glucans are absorbed by specialist cells in your digestive tract called Payer’s patches. These immune cells break down the beta glucan particles into tiny, more bioavailable fragments.

In turn these beta glucan fragments are then transported, via your blood circulation, to your lymph nodes, bone marrow, thymus and spleen - organs that are responsible for your immune system.

These are then slowly released back into the bloodstream for distribution throughout the body - activating cellular immune response in T cells and neutrophils and ensuring you are primed to fight infection.

This gradual distribution means that the immune system does not become overstimulated, and that no autoimmune response is triggered. For this reason Immunoshield, containing Wellmune can be defined as an immune-modulator, enhancing T-cell response.

This is significant for counteracting viral threats – because, although a vaccine can help prevent a virus taking hold, it is actually the T-cell response that kills the virus if it should take hold.

A further benefit of Wellmiune® beta glucans is that it has been shown to reduce stress levels.

Although Wellmune® is extracted from yeast, it is gluten free.

$200 million worth of research

Kerry Group and previously Biothera, the biotech companies behind Wellmune, have spent over $200 million on research. In 2009 Biothera received the Frost & Sullivan Excellence in Research Award for its development of Wellmune.

There are other beta glucans on the market but they lack the patented mechanism and clinical substantiation research behind Wellmune.

Recent studies are listed below – and further scientific references are available in Natural Defenses and from the research pages on this site.

Buy Now with Money Back Guarantee