ImmunoShield helps defend against colds, flu and other viral/bacterial threats

A strong immune system is central to staying free from colds and flu – and viral infections generally.

These white blood cells are like a permanently patrolling, rapid response guard that looks out for incoming enemies – in this case viral, bacterial and fungal threats.

Read more → What are neutrophils, macrophages and Natural Killer cells?

A natural compound, called 1-3, 1-6 beta glucans, ‘primes’ your innate immune system. It works by increasing the number and activity level of the white blood cells.

By far the best researched form of 1-3,1-6 beta glucans is WellmuneTM from Kerry Group, with over £120 million of clinical trial research behind it.

Beta glucans can be derived from the cell walls of certain plants like shiitake mushrooms, or, in the case of WellmuneTM, from a form of baker’s yeast. These are then purified so that they cannot cause any allergy reaction.

When the Canadian Military tested some 100 potential immune boosters (even against radiation), WellmuneTM came out as number 1 for effectiveness.

ImmunoShield, containing Wellmune beta glucans, is proven safe to use in the face of both an incipient problem – for example the onset of a sore throat – or on a continuous basis.

Echinacea, for example, has an undoubted immuno-modulatory effect, but some health writers have expressed concern that continuous or over-use of it could lead to this.

Beta glucans work in a completely different way, so they are completely safe on a continuous long-term basis.

WellmuneTM beta glucans have been subjected to dozens of studies.

A 90-day study, presented at a British Society for Immunology conference, assessed the effectiveness of WellmuneTM beta glucans, the main active ingredient in ImmunoShield.

The study was conducted with a healthy population of 100 medical students during the peak of the 2010 cold/flu season. Medical students, of course, work long hours in hospitals which inevitably places stress on their immune systems. Those taking WellmuneTM daily reported: 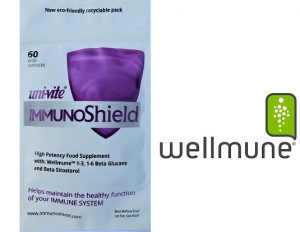